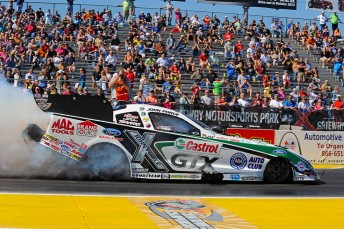 Force was triumphant over NHRA Mello Yello Series frontrunner, Jack Beckman, whilst Antron Brown won Top Fuel and Erica Enders-Stevens got back to the top of Pro Stock.

It was Force’s 136th career NHRA final round victory and under the Countdown system sees him six points from the Championship lead.

He saw off Chad Head, Ron Capps and Robert Hight in his move to the final.

“We’ve got a points race now, and I’m excited,” Force said. “I had a good day. The most important thing for me was to see the crowd. They filled the bleachers. To win a championship, you’ve gotta live it every day, and I’m not chasing a championship

“I’ve been chasing corporate America and taking care of our sponsors. My wife set me straight this morning. She said, ‘What you need to do is win. We need John Force to get back to winning races.’ Hey, I can do that. I ain’t going to say I will win another race or a championship, but I’ll be in the fight with these kids.”

Matco Tools racer Antron Brown beat out Khalid alBalooshi to take just his third win of season 2013, but 40th of his career.

He beat out Billy Torrence, Clay Millican and Tony Schumacher to get to the final. Front-runner, Shawn Langdon was eliminated in the second round by Australian driver, Dave Grubnic, who then lost out in the semis to alBalooshi.

“It’s no secret we’ve been struggling a lot more than what we had hoped to, and we had hoped we could have had a turnaround a little sooner, but we’re not going to go out without a fight,” said Brown. “The class is at an all-time high where everybody is running strong, but we just want to get back in the groove because it’s not going to be over until it’s over.”

For two years in succession, Erica Enders-Stevens has taken victory in the Mid-West Nationals. It wasn’t an easy run for the lady racer who locked out Deric Kramer, Shane Gray, and Rickie Jones before meeting Mike Edwards in the final.

In a difficult season, she had missed six of the last eight races due to a lack of budget.

Matt Smith surged to the Series lead with his second victory of the season, taking out LE Tonglet in the final. Smith has been battling to take victory – finishing the runner-up in his last three final round appearances.

He beat 71-year-old Joe DeSantis, Eddie Kraewic and one of his chief combatants for the Mello Yello Series, Michael Ray on his way through to the finals.

The Championship Countdown Chase continues next weekend in Reading at Maple Grove Raceway.