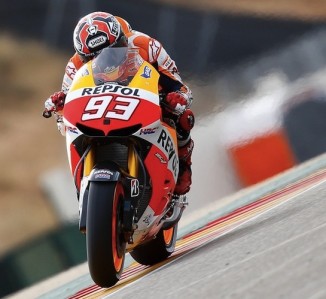 Honda team boss Livio Suppo has admitted that slight contact led to a bizarre failure which forced Dani Pedrosa to crash heavily during the Aragon Grand Prix in Spain.

As eventual race winner Marc Marquez attacked team-mate Pedrosa, the young star made faint contact which was enough to damage a traction control cable, explaining why Pedrosa high-sided when he opened up the throttle exiting the corner.

“Unfortunately, it looks like they slightly touched each other and the sensor for rear wheel speed was broken,” team principal Livio Suppo confirmed to MotoGP.com

“After that, there was no more traction control and that is why Dani crashed.”

Pedrosa was left with little to celebrate on his 28th birthday.

The crash, when Marquez was challenging for second place, now leaves Pedrosa 59 points in arrears of championship leader Marquez with four races remaining.

After the incident Pedrosa was taken to the medical centre, suffering a heavy knock to his hip and lower back.

Marquez was apologetic however Pedrosa was not so accepting of the situation.

“He (Marquez) was over the limit, completely missed the braking, tried to avoid me and at that moment touched me a little bit and went off,” Pedrosa explained.

“When I opened the gas, the cable of the traction control was broken so I had a big high-side and couldn’t really avoid the crash, unfortunately.

“The positive part is that I am physically okay. I had a big impact on my hip and my lower back, but it is nothing really to worry about at the moment.