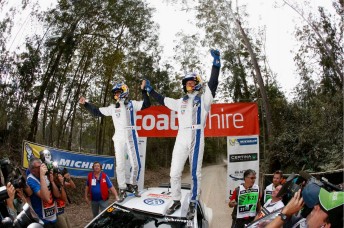 Coates Hire Rally Australia back in 2014

Following the recent staging of Rally Australia at Coffs Harbour, the FIA has officially signed off on the event being held in the northern New South Wales city until 2015.

The second of a three-year deal struck with the WRC promoter will see Coates Hire Rally Australia staged at a similar date to this year with the final day set for September 14 in 2014.

Rally Australia chairman Ben Rainsford said the recently staged event, the second to be held in the Coffs Coast region, had exceeded expectations in terms and had drawn sound ticket sales.

The three-year contract for Rally Australia replaces the swap system it had experienced in recent years by alternating every other year with Rally New Zealand.

Rally Australia has signed a contract for 2014-15 with the series organiser, WRC Promoter GmbH, the Munich-based consortium of Red Bull Media House and the sportsman media group.

It is understood though that the FIA’s confirmation of 2015 won’t come out until this around this time next year.

Confirmation of the Coffs event next year  is the first time since the WRC event left Perth in 2006 that Rally Australia will stage consecutive events.

Organisers of the widely regarded NZ event relinquished their turn next year, paving the way for Australia’s three-year deal.

While the calendar confirmation is good news for Australia, it is quite the opposite for the Acropolis Rally which had risen to iconic status over the five decades the WRC has been in existence after the Greece leg was axed.

Poland will rejoin the calendar in its place with a unique multi-country rally with legs staged in Lithuania.