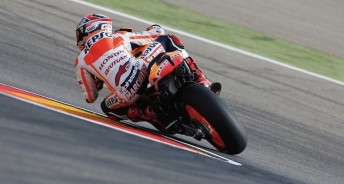 Marc Marquez on song in qualifying at Aragon

MotoGP championship leader Marc Marquez will start from pole position for the Grand Prix of Aragon after coming through one of the closest qualifying sessions of the season.

On home soil, the Honda rider was forced to dig deep late but he came up with the goods to take pole by a hundredth of a second from arch rival Jorge Lorenzo.

Lorenzo set the tone for the session with his first flying lap dipping into the 1:47s bracket, setting a new lap record at the Spanish circuit. However, his name in the record books was short-lived as Stefan Bradl and then Pedrosa enjoyed spells at the top of the timesheets.

Marquez made a slow start to the session and it took him until the halfway point to make his mark slotting into provisional second behind Pedrosa.

With five minutes remaining, the riders returned to the track for a second assault.

Rossi was the first to make a move as he leapt into second replacing Marquez in the process.

Lorenzo was the next rider to strike and he snatched provisional pole away from Pedrosa with just 60s left on the clock.

But celebrations were muted as Marquez produced a blistering 1:47.804s to grab pole from his fellow countryman.

Australia’s Bryan Staring will start from 21st position with fellow Aussie Damian Cudlin starting from the back of the grid on his return to the championship with Paul Bird Motorsport.

See below for full qualifying result