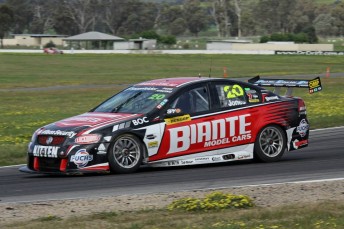 Andrew Jones will run in these Biante colours at Bathurst

Andrew Jones will compete in next month’s Bathurst round of the Dunlop Series with major sponsorship from Biante Model Cars.

The Perth-based company’s logos have appeared on a number of V8 Supercars over the last decade, but rarely as a primary backer.

The car ran in its Biante livery for the first time at BJR’s pre-Bathurst test at Winton on Wednesday. 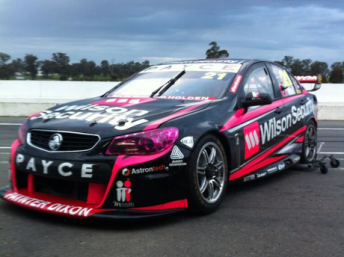 “Australia’s passion for motoring and motorsport is a passion we share, so to have recently committed to replicating the COTF (Car of the Future) platform for Holden and Erebus, plus this one off sponsorship with BJR will hopefully further cement our position in the marketplace as Australia’s leading model car manufacturer.”

Jones currently sits third in the standings heading to Bathurst despite having gone winless through the season to date.

The 2004 series winner will join Jason Bright for the Supercheap Auto Bathurst 1000. The pair finished just 24th in the Sandown 500 after losing 14 laps with a steering failure.