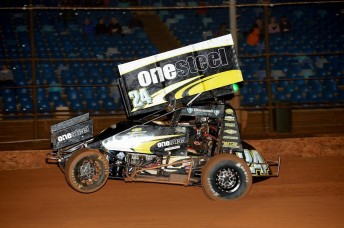 His uncle Steve Kinser is a 20-times World of Outlaws champion who has raced everything from IndyCars, NASCAR, IROC, 410ci winged sprints and Speedcars.

Steve told his nephew that spending a summer season at Parramatta was the best way to gain experience.

The red clay arena has been re-surfaced and drivers who ran the pre-season practice night had no trouble logging laps in the 11s bracket.

Sydney chief executive Mike Raymond has made some interesting changes to the Speedway and there are indications that a new naming rights sponsor will be announced for the track.

“I have always thought of this circuit as Parramatta Raceway, just as Eastern Creek, Oran Park and Liverpool City Raceway defined who and where they were,” Raymond said.

The show starts at 7.00pm at the Speedway.