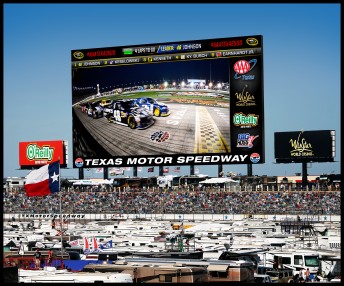 The Texas Motor Speedway has been forced into a programming switch for the Texas 500 NASCAR Sprint Cup race next year as it prepares to construct the world’s biggest high definition TV screen.

After being run on a Saturday night over the last three seasons, the Sprint Cup race will now be delayed until Sunday, April 6, to avoid a direct clash with the college semi-final basketball games in 2014.

Other tweaks to the schedule that weekend will see the O’Reilly Auto Parts 300 Nationwide Series staged on Friday evening (April 4) while Sprint Cup qualifying will be held on Saturday afternoon (April 5).

The NASCAR Camping World Truck Series remains alongside the IndyCar Series for the 18th straight season to be run from June 5-7.

Concluding the season at the TMS will be the NASCAR tripleheader of the Trucks, Nationwide and Sprint Cup series from October 30-November 2. It is the eighth race in the Chase for NASCAR’S holy grail.

As the TMS firms up its schedule for next season, the speedway will unveil the world’s largest high definition video screen in time for the NASCAR April event.

Developed by Panasonic, the video display called ‘Big Hoss’ will be positioned in the middle of the back stretch with a massive 20,633.64 square feet of HD display (almost half an acre).

The TMS video board will be 79 per cent bigger than the display at the Dallas Cowboys’ AT&T Stadium.

The ‘Big Hoss TV’ will make its debut at the April 3-6 NASCAR weekend.

TMS Speedway chairman and CEO Bruton Smith said: “This continues to show our company’s commitment to our great race fans and our efforts to remain at the forefront of our industry.

“Eddie (TMS president Gossage) always tells me everything is bigger in Texas so I wanted to make this video board fit his motto.”

Construction of the monster screen will commence after the October 31-November 3 AAA Texas NASCAR tripleheader weekend with completion expected next March.

See below for 3D video