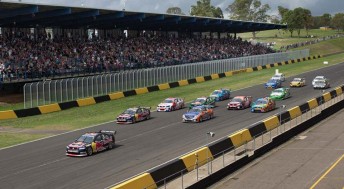 V8 Supercars race action will return to SMP next year

V8 Supercars has officially released its 16 event 2014 schedule, confirming a return to Sydney Motorsport Park and absence from the Circuit of the Americas.

As previously reported, SMP will host a championship race meeting for just the second time since 2008.

The August 22-24 event will act as the lead in race to the Pirtek Enduro Cup, and complement the circuit’s pre-season test day.

The absence from the COTA in Austin, Texas, is said to only be for one year.

CLICK HERE for separate story on the Austin 400’s future

The calendar announcement from V8 Supercars added that “a minimum of five Saturday twilight races are possible in 2014”, although confirmation of which events will feature the format won’t be released until the New Year.

This year’s Sydney 500 will provide a prelude to more evening racing, with its Saturday race scheduled to run between 1710 and 1930 local time.

The New Zealand event at Pukekohe, which saw four 100km races upon its return to the calendar this year, will now be held over 500km during the ANZAC day long weekend in late April.

Scheduled for four days, the first 100km race of the weekend is set to take place on the Friday, with the remainder of the weekend to follow the revised Super Sprint format.

Winton is the biggest mover of all for next year, continuing its annual shuffle by shifting from late August to early April.

V8 Supercars CEO James Warburton stressed his mantra that “innovation” is the key to moving the championship forward.

“We have the opportunity to continue with an entrepreneurial approach, with high levels of innovation and commitment to our fans,” he said.

“There is a chance to build on the energy and passion of the business created through the course of this year; taking it to the next level in 2014 and even further in 2015.

“We have had the period of consolidation, now is the time for innovation, growth and building for the next five to ten years.”

The Dunlop Series will appear at the same seven venues as this year, with the movement of the Winton date the only significant change for the second-tier class.

See below for the full 2014 V8 Supercars calendar