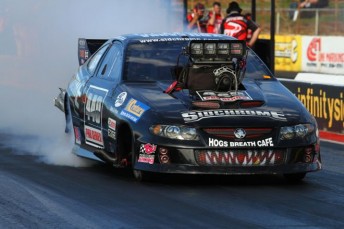 It’s been over five years since Ben Bray last took an ANDRA Top Doorslammer trophy, but he righted that at Adelaide International Raceway by taking victory in the Springnationals.

After damaging pistons in the only qualifying session on Friday night, Bray’s team burnt the midnight oil to get the Sidchrome Monaro back on track. In the semi-final, one of the doors came adrift in the braking area – forcing the Bray team to source a replacement door from combatant Maurice Fabietti – who he eliminated in the first round.

He beat out John Zappia in the final – who moved closer to Peter Kapiris in the Championship chase. Prior to that, Bray got around Top Qualifier, Stuart Bishop who eliminated Victor Bray in the opening round.

“I short shifted pretty early when it started to move around, a guy like John Zappia never says die until I’m across the finish line so I knew I couldn’t say die unless he passed me,”  said Bray.

“Zap normally pips me right on the finish line and wrecks my night so I wasn’t giving any.”

In Pro Stock, Aaron Tremayne rocketed back to the top of the ANDRA tree, beating out Shane Tucker in a rare Australian return before heading to the US to compete in the American NHRA Pro Stock ranks.

Tremayne had the perfect weekend, annexing top qualifier, quickest elapsed time and fastest speed points as well as the round win.

He now moves to within 33 points of the Championship lead with current leader, Jason Grima bowing out in the semi-finals.

“All the travel and all the work pays off. It’s unbelievable to finally get a win in,” White said.

“Eventually you’ve got to have a turn if you keep poking away at it. But it wasn’t as if we just stumbled into it, we were second qualifier and we ran good numbers.

“Once you’ve got one win the monkey is off the back and who knows, we might get some good ones in now.”