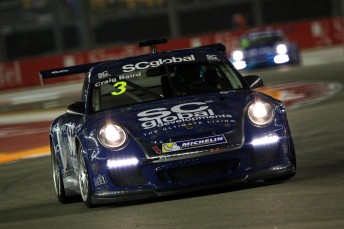 The defending two-time winner of the event, Baird was just 0.087 behind the series leader and ahead of series champion Alexandre Imperatori. First to top the timing sheets at the start of the session was Macau driver Rodolfo Avila with Tung Ho-Pin of China right behind. However, it wasn’t long before Bamber shot to the top of the order for the first time, grabbing provisional pole. Imperatori dramatically snatched it back only seconds later after completing a blinding lap, but still only going five thousandths of a second quicker than Bamber.

After everyone went onto their second set of Michelin tyres mid-way through the session, Baird was on the limit, leaping up the order from seventh to third, then going two better to take provisional pole. Bamber responded with his impressive pole-setting lap of two minutes 19.955 seconds. Then series newcomer Mario Farnbacher, who had put in a strong performance on his Porsche Carrera Cup Asia debut to go eighth fastest at one stage, stopped on the side of the track, and John Shen hit a barrier, the yellow flags came out and Bamber sealed pole position.

“Congratulations to Earl, a young driver, leading the championship, good for him and good for New Zealand. When you’re second, you’re always looking at what can be better.

“The car is fine. At the end of qualifying, I was a bit rough around some of the edges and not piecing my best seconds together.”

Bamber is the only series driver so far to lap the 5.073km Marina Bay street circuit in less than two minutes and 20 seconds, but so close were the times that the top seven drivers were all within a single second of each other.

“It was a really intense session,” said Bamber.

“We had a little problem at the start and had to rectify it so it was a good turnaround by the team. We had to start from the back and we were lucky to get in a couple of good, clear laps. I knew the first set of tyres was not going to be enough and I knew I had to go out early in case there was a yellow. I improved our time just ahead of the yellow flags. It’s great we can get a pole position and start on pole for the Singapore Grand Prix.”