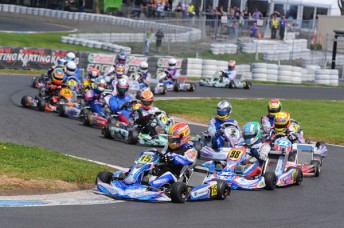 With a maximum of 65 points up for grabs on the final day, Matthew Waters holds a six point lead in the Pro Light (KF) Championship (PIc: AF Images/Budd)

The battles for the Championship honours in the Castrol EDGE CIK Stars of Karting are set to go down the wire at Melbourne’s Port Melbourne Karting Complex on Sunday.

Both the Pro Junior (KFJ) and Pro Light (KF) categories are shaping up as grandstand finishes Championship-wise.

Abela fought back in the final heat of the day to finish in front of local driver McLellan, who qualified further up the grid than his chief combatant.  Entering the final day of the 2013 Series, McLellan now holds a nine-point buffer at the top of the standings.

In today’s racing, Queenslander Callum Walker showed the form he has been threatening all season long by establishing the pole position time and then soaring to three consecutive wins in his 16-lap heats.

Championship wise, it was a very similar story in Pro Light (KF). Matthew Waters came into the weekend leading by seven points and appeared to have the measure of nearest challenger, George Geranis. That was until heat two when Waters got into trouble mid way through the race with Harrington Doyle Racing’s Joshua Crossingham.

Waters struck back to finish the final heat third and maintain the pressure heading into tomorrow’s pair of long finals. The Championship gap between Waters and Geranis sits at six points.

The battle at the front of the Pro Light pack has been between Pierce Lehane and Adam Willison. After setting identical times in qualifying (to the one-thousandth of a second), their final heat race produced some of the best racing seen in season 2013 with Willison having superior pace, however Lehane was wheel perfect to hold him out.

Brock Plumb snuck through for a heat race victory in heat number one after an absolutely brilliant start saw him jump pole man Willison and Lehane.

In Pro Gearbox (KZ2), runaway leader heading into this weekend’s final round, Joey Hanssen appears to have firmed his grip on the John Pizarro Trophy. He won all three races comprehensively today whilst his nearest competitor, Energy Corse’s Christ Hays has been fighting his way forward after a lower than expected qualifying position.

Cian Fothergill is showing plenty of promise. He’s had a wretched run for much of the season in Pro Gearbox, but walked away with a solid second placed finish in the final heat on Saturday showing similar pace to Hanssen.