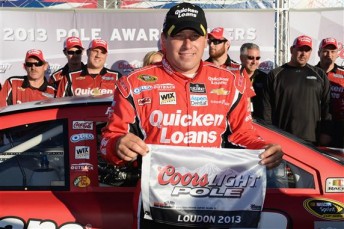 Ryan Newman has scored pole position for the second race in the ‘Chase’ for NASCAR’s Sprint Cup, setting the fastest time for the Sylvania 300 at New Hampshire Speedway.

It is Newman’s 51st pole of his career, bis second of the season and seventh at Loudon as he looks to add to his four career wins at the Magic Mile.

Kasey Kahne will start alongside Newman on the front row after setting the record early in the qualifying session with a speed of 136.082 mph before giving way to the No. 39 Stewart-Haas Racing Chevrolet.

Jeff Gordon was the second last driver to take his qualifying laps, a benefit that allowed him to earn a speed of 136.053 mph, good for third.

After topping the leaderboard in the opening practice earlier in the day Kurt Busch will start fourth, and a day after primary sponsor NAPA Auto Parts announced it would cut ties with the No. 56 Michael Waltrip Racing Toyota for 2014, Martin Truex Jr. piloted the vehicle to a fifth position.

Australia’s Marcos Ambrose will once again have plenty of work to do starting back in 22nd.

“We were faster than the summer and that’s as fast as we’ve been today,” said Ambrose.

“It’s a tough track and we just need to get our car to turn as best as possible. We’re getting closer and tomorrow we have a full day to work on race runs and prepare for Sunday.”