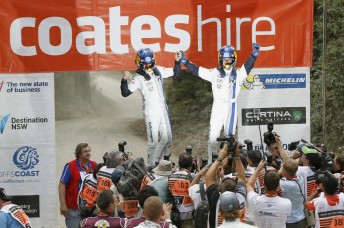 Rally Australia could see a super special stage finale in Sydney, most likely at the Olympic venue at Homebush Bay.

If it comes off it would require a massive logistical effort to transport the entire WRC circus 600km south.

In any case Rally Australia is on the verge of returning to the WRC calendar on a regular basis.

Since it was last run in Western Australia in 2006 after a run Perth which began in 1989, the event was in limbo for a few years before being revived in 2009 when it was based at Kingscliff near the Queensland border.

It was next held at Coffs Harbour in 2011 and has been on a rotational basis with Rally New Zealand by being held every other year.

However NZ gave up its turn in 2014, allowing Australia to stage a consecutive event after the success of the Coffs rally last weekend won by Sebastien Ogier.

Australia is firming to be granted a three-year term from 2015, however where it leaves the New Zealand event remains unclear.

The WRC calendar for 2014 is expected to be released later next week.