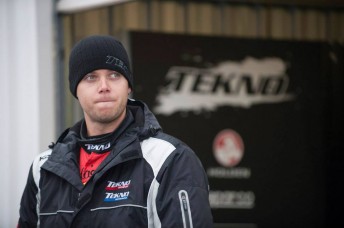 The Tekno Autosports V8 Supercars regular helped McLaughlin to win the class’ inaugural drivers’ title last season, but was thought to be in danger of missing out on the ride this year in favour of Supercheap-backed Russell Ingall.

“I am excited to partner Scotty and challenge my ‘Aus’ team-mate SVG (Van Gisbergen) for the endurance series,” said Webb, who took a 13th place finish in last weekend’s Sandown 500 alongside German Marc Lieb.

“Scotty has shown he has the equipment and speed. We are comfortable with each other’s racing style and I’m confident we have what it will take to retain the cup.”

McLaughlin has had a tough run in this year’s V8 SuperTourer season to date; sitting ninth in the series after four sprint rounds.

The 20-year-old’s team even threatened to pull out of the series over poor driving standards following the most recent event at Taupo.

The endurance races, however, provide an opportunity for McLaughlin’s fortunes to change.

“I’m excited about the enduros; they were the game changer for us last season and a strength for both Jono and I,” he said.

“On the back of Taupo’s disappointment, the determination is there for Hampton. It’s stronger than it’s ever been and we’ll be keeping that on our side.”

The first of the V8 SuperTourer endurance races will take place at Hampton Downs later this month.