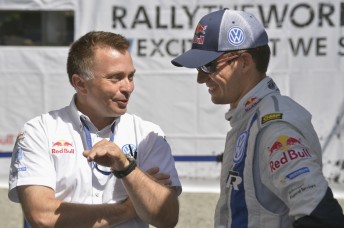 The German giant is on the cusp of snaring its first driver’s championship through Sebastien Ogier and has forged more than 40 points clear of Citroen in the manufacturer standings with three rounds remaining.

Ogier is only one point away from becoming the first driver since Subaru’s Petter Solberg (2003) to win the WRC other than Citroen superstar Sebastien Loeb.

Volkswagen has been forced to reset its goals following the success of its Polo R program for Ogier, Yari-Matti Latvala and Andreas Mikkelsen.

“We have a program up to 2015 and we had to change our target because the target was to fight for the title in that year and now we will achieve that this year,” Capito told Speedcafe.com

“For sure we will not step back. But we hope that the championship will be very tight every year and that there are good manufacturers, good drivers, good cars so that there is always a good battle.

“So our target is not to dominate but we want strong competition.”

Ogier is an unbackable favourite to seal the title in France next month where he will again be pitted against his countryman Loeb who will be having another hit and run appearance for Citroen.

In Loeb’s three previous WRC appearances this year he won the Monte and Argentina events with Ogier second in both while Ogier reversed the positions at Rally Sweden.

It will add more muscle to the heir apparent if Ogier can balance the head-to-head encounters at the Alsace rally which will give him the title at the same time beating the most successful rally driver of all time.

Capito has commented that Ogier brings the most all-round game plan to the WRC.

“I think at the moment he is the most complete driver in the World Rally Championship.

“His self confidence is very high. His driving ability, his driving instinct is very high and also I think he has got the best car so everything comes together for him this year.”