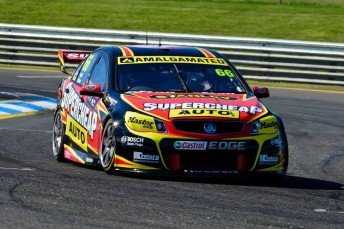 Tim Slade will pilot the Supercheap Holden in 2014

Walkinshaw Racing has officially confirmed that Tim Slade will replace Russell Ingall in its Supercheap Auto Holden next season.

Currently competing for Erebus Motorsport, Slade was known to be a target of the Melbourne-based outfit for some months.

Slade’s exit from Erebus was publicly announced on Friday following heightened speculation over his impending move.

The Walkinshaw deal sees Slade step away from long-time backer and fellow South Australian native James Rosenberg, whose Racing Entitlements Contract Slade has raced under for the previous four seasons.

Rosenberg has told Speedcafe.com that he is keen to remain at Erebus next year, although no deal has yet be struck.

Slade will replace Ingall as the face of Supercheap Auto’s marketing, having raced alongside the veteran under the brand’s banner during his debut V8 Supercars season at Paul Morris Motorsport in 2009.

Slade’s appointent co-incides with the team inking a fresh deal with the sponsor.

“To be able to join a team as successful as Walkinshaw Racing and reunite with Supercheap Auto was the perfect scenario for me when I was considering the next step in my career,” Slade said. 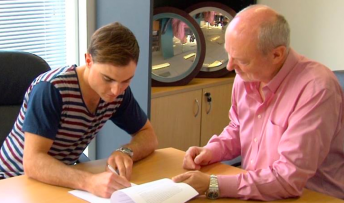 Slade and Hallam formalise the agreement

“Walkinshaw Racing’s achievements are second to none, and its recent results show it is coming to terms with the Car Of The Future chassis.

“It has an impressive depth of technical talent and a strong, on-going development program, everything that is required to be successful on-track.”

Added Slade of Rosenberg: “I cannot say enough about James and everything he has done for me.

“Not only has he been my ‘car owner’ from day one, he helped guide my career and has become a great friend.

“James and I discussed all the possibilities for my future throughout this process and he gave me his full support in my decision.

“By announcing my decision today, it also allows me to get on with the job and finish the year in the best possible way for James and Erebus Motorsport.”

Walkinshaw managing director Steve Hallam, who will be replaced by former Red Bull Racing Australia team principal Adrian Burgess in February, said that Slade will fit in well with the team.

“Tim is a very capable and talented young driver who joins us without any airs and graces,” he said.

“He is understands what is required to be successful, which is hard work, commitment and his playing his part in achieving our team’s goals.”

Walkinshaw Racing has also secured the services of current Ford Performance Racing engineering manager Mathew Nilsson for 2014 as the Holden outfit invests heavily in returning to its former glory.

A Tander-led one-two at Townsville in July ended a near two-year losing streak for the team, while Courtney ended an even longer victory drought last month at Winton.

A Walkinshaw entry outside of the two HRT cars has not won a V8 Supercars Championship race since Rick Kelly’s final appearance in HSV Dealer Team colours at Oran Park’s 2008 season finale.