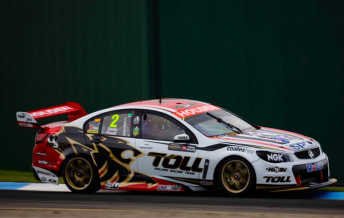 Toll branding will disappear from the HRT Commodores next year

Transport company Toll Group will end its eight-year sponsorship of Walkinshaw Racing at the conclusion of the current season.

Toll joined the Clayton-based outfit as the naming rights partner of the HSV Dealer Team in 2006, winning consecutive drivers’ titles with Rick Kelly and Garth Tander.

The company moved with Tander to the Holden Racing Team in 2008, acting as the factory squad’s title partner for three seasons.

The HRT’s Commodores have continued to sport prominent Toll branding on their front doors and bootlids over the last two years, but will no longer do so in 2014.

“While we have enjoyed our eight years of supporting Holden teams, as Australia’s largest provider of transport and logistics we have decided to instead support important road safety initiatives across Australia,” confirmed Toll Group managing director Brian Kruge in a team statement.

“It’s been a great eight years for Toll and the Holden Racing Team, and we wish them all the best for the future.”

Toll’s exit from the HRT had been the subject of repeated speculation over the years.

The company was said to have elected against renewing its deal during 2009, before a well-timed Bathurst victory sparked a change of heart.

Walkinshaw Racing confirmed earlier today that it has re-signed Supercheap Auto as the major sponsor of its third entry, which will be driven by Tim Slade next season.