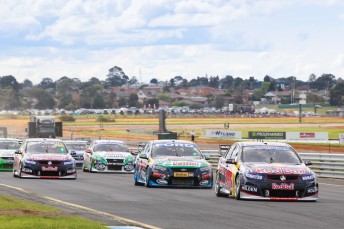 In the Castrol EDGE V8 Predictor standings Acc-sell-or-ators has knocked DaveTE50 off the leaders perch at the top of the overall standings. Tafs’R’Us sits third outright with Peckstar and SKBR both nipping at the heals of a podim spot, just one point behind in the overall standings

The weekly prize winner for Round 9 of the V8 Supercar Championship at Sandown, JEB Racing, scored a respectable 67 points for the round with a prediction accuracy of 58%. This sees JEB Racing win an awesome retro pack thanks to Castrol EDGE.

Among the Experts the Oliver Gavin  took out the round amassing 39 points with Speedcafe.com Team a close second with 34. The battle at the top is now a close fight between  the 2012 American Le Mans Series GT Champion Gavin and the Speedcafe.com Team with just one points separating the two and Speedcafe holding the lead.

Not far behind is Wallabies superstar James O’Connor, with Russell Ingall (V8 Supercars champion) backing up the field after an unfruitful round.

With the silly season fast approaching, it’s not too late to join in on the action. There are still four events left in the V8 Supercar Championship series with plenty of awesome prizes on offer including Castrol merchandise packs and the fantastic major prize of the ultimate Castrol EDGE V8 experience which is a  trip for two to the 2014 Clipsal 500 – including a hot lap of the track.

CLICK HERE to see how you’ve fared so far or to sign up for your chance to win this money can’t buy experience.