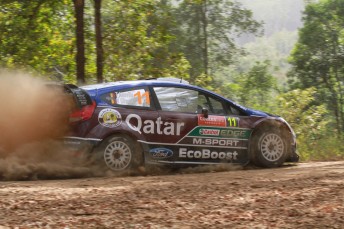 M-Sport managing director Malcolm Wilson remains uncertain of the future of his Cumbria-based operation as he tries to retain the services of star Belgian driver Thierry Neuville.

Plans for the squad which campaigns the factory Qatar Ford Fiesta RS WRC machines remain unclear going into the 2014 season.

When approached at Coates Hire Rally Australia on what the future holds, Wilson confirmed that Qatar have indicated their are willing to continue backing.

Needless to say M-Sport are eager to retain Neuville’s services next season.

“This time last year we didn’t know whether we’d be here once Ford decided to withdraw,” Wilson told Speedcafe.com

“At least I knew what we are working with. We are in good discussions with Qatar they want to continue. Hopefully we can find a way. The most important thing is to try and retain Thierry as well.

Wilson says the #1 priority is to keep the team afloat.

“First and foremost the key thing is to keep the team going. We have got 200 people employed back at the factory in Cumbria. That’s the most important thing.

“And if we can keep somebody of Thierry’s calibre then that’s a real bonus.”

Wilson was delighted with Neuville’s maiden start at the Rally Australia event saying he spent a lot of time in the service park perfecting his pace notes with co-driver Nicolas Gilsoul.

“Thierry is very professional in the way he’s gone about it. He’s one of the hardest working drivers in the WRC at the moment.