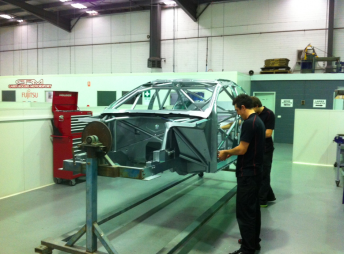 Garry Rogers Motorsport has released images of the first Volvo S60 V8 Supercar being built at its Melbourne workshop.

As announced in June, the team will switch from Holden to Volvo next year under a partnership with Volvo Car Australia and Volvo’s Swedish performance arm, Polestar.

The images show GRM’s first chassis in final stages of completion ahead of the fitment of the S60 panels that it is designing in-house.

The chassis itself is a control specification across all teams under the new-for-2013 Car of the Future regulations.

In a note on the team’s website, Garry Rogers underlined his expectation that the car will hit the track before the end of the year.

“When you look at these photos you may not get quite as excited as myself and the team and we certainly do not want to get ahead of ourselves but today is the 18th of September and we are in the process of putting our first S60 Volvo Supercar together,” he wrote.

“All our activities are going along well and we realise that occasionally there will  be some matters that we will have to deal with and these will crop up from time to time but I am extremely confident that we should have a car completed for aero testing and homologation for the end of the year.

“It is important to remember that during the course of all this activity we have still been competing with our Holdens with quite worthwhile results.”