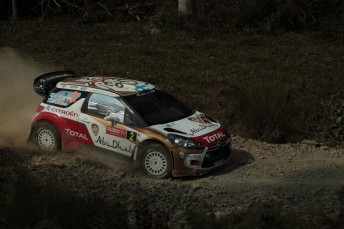 Mikko Hirvonen during the last day of Rally Australia. Hirvonen is being linked with a move to Hyundai

Finnish driver Mikko Hirvonen has all but ruled out staying with Citroen next season as the jockeying for positions in the 2014 World Rally Championship intensifies.

Hirvonen was non-committal about his movements amid growing talk that he will become one of Hyundai’s factory drivers in the Korean giants return to the pinnacle of world rallying.

The 33-year-old was on track to finish second in Rally Australia at Coffs Harbour last weekend before a punctured left rear on the final power stage saw him drop to third overall for the Citroen Total World Rally Team.

Australia’s Chris Atkinson remains strongly in the frame to secure a seat at Hyundai after being named as one of three official test drivers for the big budget i20 program.

Hyundai are continuing an intensive test program ahead of their re-entry into the WRC after a 10-year absence in Europe which will see Atkinson central to the final development preparations.

Atkinson, a winner of 41 WRC special stages, is determined to break back into the WRC full-time after occupying a seat with Subaru’s factory team from 2004-2008.

The Queenslander appeared in sporadic drives since for a variety of operations including the Citroen junior team, Monster Fiesta, Qatar Citroen, Team Mini Portugal and a solo appearance with Citroen this year when he finished sixth in Mexico.

As Atkinson remains ever hopeful, Hirvonen would not be drawn into any specific discussions about his movements next year other than he wants to continue his WRC career which has netted him 15 wins and four runner-up positions in the championship.

“I hope I can have a drive next year and carry on. But there are no decisions yet,’ Hirvonen told Speedcafe.com

“But even if its any good I don’t think I have secured a place with Citroen either so we will have to wait and see.

“It’s always the same you always try to reach people and talk to everybody but there is nothing yet.”