Refuelling stops at every event in 2014

Refuelling stops at every event in 2014 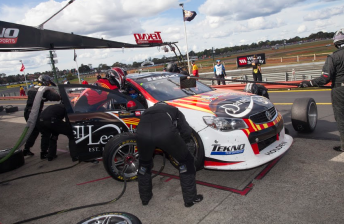 Pitstop action at the Sandown 500

V8 Supercars’ ability to achieve fuel economy parity between its five manufacturers will be thoroughly put to the test in 2014, where every championship event will feature in-race refuelling.

Fuel stops had only been seen in two of the first 10 events for this year’s inaugural ‘Car of the Future’ season in a clear effort to reduce the emphasis on economy prior to the endurance races.

The new-for-2013 Super Sprint format, which this year sees six events feature a 60/60 Saturday race and two 100km races on Sunday, will be modified to see the two 100km encounters moved to Saturday, followed by a single 200km race on the Sunday.

According to V8 Supercars CEO James Warburton, the Super Sprint will be seen at every event outside of the Adelaide, Townsville and Sydney street races and the Pirtek Enduro Cup.

Each leg of the Townsville event will be extended by 50km to mirror the twin 250km race format seen in Adelaide and Sydney.

That format has now been dubbed ‘Super Street’ and ensures there’ll be just three different event layouts next season.

“We very much believe that the fans own the sport, so we’ve done a lot of research around our formats and how we build progress the series,” Warburton told Network 7 on Sunday.

“Through the Commission process we’ve simplified it to three specific formats.”

Although yet to be confirmed, it is expected that Warburton’s push for twilight competition will see up to half of the events feature evening races.

The Saturday race at this year’s season-ending Sydney 500 is tipped to debut such a timeslot, designed to push the category into prime-time television viewing.

The 2014 V8 Supercars Championship calendar is set to be revealed in the coming week, with the category having recently confirmed the return of the Sydney event under a fresh three-year deal.