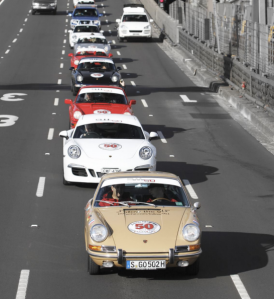 Four months after the big Porsche Rennsport meeting at Sydney Motorsport Park, the manufacturer has celebrated 50 years of its most iconic nameplate, the 911 in Australia’s largest city.

A huge convoy stretching 1.5km in length of more than 100 911s rolled across the Harbour Bridge in celebration of the half century milestone.

A police-issue Panamera led the cavalcade across the bridge with a 1967 model from the iconic Porsche museum leading what is being billed as the ‘World Tour 911’.

The combined value of the 911s participating was above $15m.