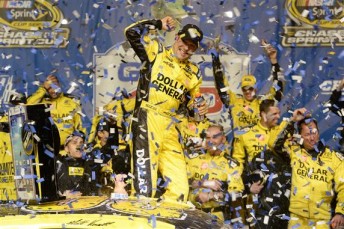 Matt Kenseth has stretched his lead in what is now the ‘Chase’ for NASCAR Sprint Cup with victory in a rain-delayed GEICO 400 in Chicago.

Kenseth held off Kyle Busch for the win, to score his sixth victory of the season and get a leg-up on the opposition as he chases his second title.

The race started during the daytime but due to weather delays, officially over five hours, it finished well into the evening under the lights at Chicagoland Speedway.

Joey Logano, who started on Pole, led the first 32 laps of the race. But under the lights, Logano ran into some engine trouble and his car started smoking again on lap 176. His night was finished at that point and he finished in 37th place.

Dale Earnhardt Jr. ran into some trouble as well as his night came to an end on lap 225 when flames were coming out of his exhaust pipe. He finished in 35th place.

“That was a good night for our DeWalt Ford team,” said Ambrose.

“We were loose in the day but the car was so much better at night. We lost some handling at the end and couldn’t get back into the top-10, but the guys worked hard to really improve the car today.”