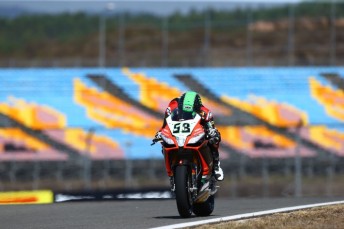 Aprilia Racing’s Eugene Laverty moved back into the World Superbike title race after recording a double victory at the championship’s inaugural visit to Turkey.

The Irishman found himself involved in a duel with championship leader Tom Sykes coming out on top in both races at Istanbul Park.

The double victory moved Laverty into third in the championship just 26 points behind leader Sykes, who opened up an eight point buffer on Frenchman Sylvain Guintoli.

Race one belonged to Laverty and it was his excellent start that set up the victory. The Irishman leapt from the second row into second spot behind polesitter Sykes and he shadowed the Kawasaki’s every move in the early stages.

The crucial point of the race came on lap 12 when Laverty dived past Sykes for the lead at the final corner. The championship leader was unable to respond and this allowed the Aprilia man to open up a lead which held to the chequered flag.

Sykes soon had to change his mentality from attack to defence as BMW’s Marco Melandri began to mount a charge after surging past Guintoli for third. Sykes couldn’t halt the Italian and was forced to slot into third position as the race neared completion.

In the end, Laverty looked assured at the front and went on to record his fifth victory of the season to kick start his title hopes. Melandri came home in second while Sykes just held
off title rival Guintoli for third.

Davide Giugliano took the flag in fifth ahead of debutant Toni Elias in sixth, while Australia’s Mark Aitchison suffered a retirement after just 10 laps.

Sykes once again made a strong start in race two while a double win for Laverty looked unlikely as he dropped to fifth on the opening lap. However, he soon settled into his rhythm and began to climb his way back to the top.

Meanwhile Sykes put the hammer down opening up a healthy lead at the front. But just like the first race, the Kawasaki rider’s pace faded as the encounter reached the three quarter mark.

Laverty, now in second spot, chipped away at his advantage before launching into the lead with just five laps remaining. The Aprilia man then proceeded to edge away at the front as he cruised to the chequered flag.

Sykes held on to second while Guintoli salvaged some much needed points in third.

Melandri was unable to repeat his race one performance and came home in fourth ahead of Elias. Aitchison rounded off his weekend with a ride to 11th spot.

The World Superbike Championship moves to America’s Laguna Seca circuit for the next round on September 27-29.