Call for WRC 2 class to be treated equal in WRC

Call for WRC 2 class to be treated equal in WRC 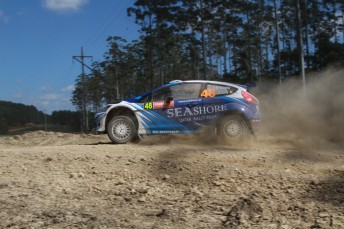 Qatari driver driver Abdulaziz Al-Kuwari took a swipe at officials, calling for the WRC 2 field to be treated on equal terms as the main crews in the World Rally Championship.

Al-Kuwari and his co-driver Killian Duffy led home a field of nine WRC 2 cars to win his third event of the season and lead the standings in the class.

The Seashore-backed M-Sport-prepared Ford Fiesta RS driver was angry after the event that the intervals for his class had not been stretched in the dusty conditions like that of the 10-car WRC field.

After finishing 10th overall Al-Kuwari, made a plea to the WRC to treat the second class fairly in the name of safety.

“I think it’s not fair that the gaps went out to four minutes for WRC and we were still at two minutes during the Rally Australia,” Al-Kuwari said.

“You can’t imagine how unsafe it is inside the car. We need someone to talk for us WRC 2 drivers and make a stand in the name of safety.”

Al-Kuwari now leads WRC 2 by 17 points over ex-F1 driver Robert Kubica who was absent from the Coffs Harbour event as he competed in the clashing rally in his home country, Poland.

Al-Kuwari’s previous two wins in the WRC 2 category this year were in Mexico and Argentina.