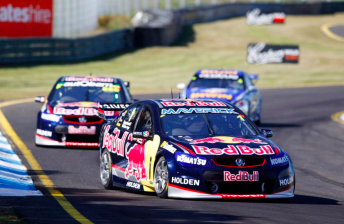 The stage is set for first race of the Pirtek Enduro Cup at Sandown after the completion of the morning warm-up.

Pitstop practice and final set-up tweaks were the order of the day in the final pre-race hit-out, with all 56 drivers cycling through the 28 cars.

Jamie Whincup ran the first half of the session in the #1 Red Bull Holden, clocking a leisurely best of 1:09.66s before handing over to co-driver Paul Dumbrell.

Pole-sitter Will Davison ended the session second having been fastest prior to Whincup’s lap.

The session was held in sunny and relatively warm conditions, with ambients approaching the day’s predicted maximum of 21 degrees.

Early predictions of showers during the race have eased, with weather now not expected to roll in until the evening.