TIMELINE: Sandown 500 as it happened

TIMELINE: Sandown 500 as it happened 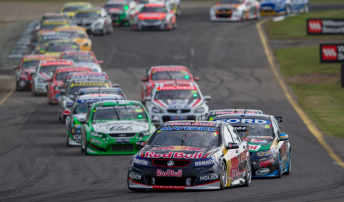 Dumbrell leads Owen and Luff through the opening turns. Richards makes a poor start, dropping well down the order #V8SC

Dumbrell is edging away from Owen at the front. Gap is out to 1.7s. Third placed Luff meanwhile is under pressure from Canto. #V8SC

Russell has the toughest job in this first stint aboard T.Kelly’s Nissan. He jumped to eighth on Lap 1 but has lost places to Jones and Perkins #V8SC

Percat now given a drive-through for pitlane speeding. The Tander/Percat Holden had taken rear tyres only in its stop #V8SC

Russell is driving the wheels off the lead Nissan. He’s narrowly holding out Youlden for 11th #V8SC

Thompson pits on Lap 19. He’ll stay in the #47 Mercedes. Safety Car is meanwhile called for a loose apex cone at Turn 6 #V8SC

Luff had to stack behind Dumbrell and will lose ground #V8SC

Luff lost places to Canto, Wood and Murphy. Every car bar that of Reindler have pitted #V8SC

D’Alberto has also pitted with a problem. It’s not going well for the Walkinshaw entries #V8SC

Luff goes off at Turn 1 after a hit from Jones. The Red Bull Holden drops to 10th #V8SC

D’Alberto confirms he had a sticking throttle; the same issue from yesterday #V8SC

Owen meanwhile is pressuring Richards for second. Richo is 32 laps into his stint #V8SC

Reid went off at Turn 1 last time through. Dumbrell stresses on the radio that he did not make contact #V8SC

Dumbrell has put 10 seconds on the FPR trio of Richards, Owen and Canto in 10 laps since the restart #V8SC

Ash Walsh has had a big accident at the end of the back straight. Safety Car again on Lap 35 #V8SC

Walsh is ok and talking to his engineer. The DJR Ford was right behind the IRWIN Mercedes when it speared off #V8SC

Owen was forced to stack behind Richards. Owen rejoins 22nd, a full 15 places behind Dumbrell #V8SC

Richards had a long refuel due to his strategy. Dumbrell rejoins ahead of Wood, Canto, Perkins, Jones and Richards #V8SC

Plenty of hard racing going on in the mid-pack. Perkins is struggling with understeer and has lost places to Jones and Richards, dropping to 12th #V8SC

Dumbrell meanwhile has moved from seventh to fourth since the restart. Luff, Thompson and Baird ahead #V8SC

Johnson pits for four tyres and fuel. He’s staying in the car #V8SC

Dumbrell moves around Baird for third. Dumbrell is less than five seconds behind leader Luff, who has made one less stop #V8SC

Dumbrell passes Luff into Turn 1 but runs wide on the exit, swapping the positions back #V8SC

Dumbrell is told to watch his brake temperatures. He continues to attack Luff as Thompson pits from third #V8SC

Pad change for Thompson, who hands over to Slade. Baird, Youlden and Gaunt also pit for their primary drivers #V8SC

Dumbrell runs off the road at Turn 2 on Lap 61. He still leads Wood by an almost undiminished 15 seconds #V8SC

Dumbrell appeared to lock his rear brakes before going off; likely a symptom of his over heating fronts #V8SC

Dumbrell pits and will stay in the car #V8SC

Dumbrell has made the driver change for Whincup #V8SC

“Sorry about the confusion,” Dutton tells Whincup. The car is on used tyres #V8SC

Owen pits from second, handing over to W.Davison, who rejoins 25th #V8SC

Briscoe pits from the lead. Lowndes now in the top spot from Coulthard, Slade, Holdsworth and Winterbottom #V8SC

Mostert is handed a drive-through for pitlane speeding #V8SC

Slade leads Holdsworth and Tander on Lap 86. Tander being told to save fuel, but spears off at Turn 9 #V8SC

Tander fell to seventh with that off, losing places to Van Giz, Premat, R.Kelly and Wall #V8SC

Slade pits from the lead on Lap 91. Holdsworth takes over the front-running #V8SC

Winterbottom and Lowndes run nose-to-tail in sixth and seventh, and are expected to cycle to the front ahead of the final stops #V8SC

Whincup takes W.Davison for eighth. The Pepsi Max Ford is saving fuel in order to get through on just one more stop #V8SC

Reynolds spears off at Turn 1, dropping from third to eighth. Whincup takes fourth from Courtney #V8SC

“Do you want me to keep saving or push?” asks Lowndes. “Keep saving” is the answer “but make the pass if you can” #V8SC

Just hang in there, we’ll tune it up in the stops in another 11 or 12 laps,” Winterbottom is told #V8SC

W.Davison and Courtney battling hard for fifth. The Ford runs off at Turn 2 but rejoins still ahead #V8SC

Canto confirms that the flat-spotted tyre was the reason for the stop. They’ll have to do another one before the end #V8SC

Bright slows from 11th. He had been complaining of “a lot of right-hand down” in the steering #V8SC

The Team BOC Holden runs straight on at the final corner, hitting the wall, but reversing out and pitting #V8SC

W.Davison pits from fourth. He’ll be tight on fuel to the finish #V8SC

Problem on the front-left lost Winterbottom time. He rejoins behind Courtney #V8SC

Coulthard emerges from his pitbox in front of McLaughlin #V8SC

Courtney is now a net fourth having moved by Coulthard #V8SC

“The fuel is not that desperate mate, just make sure the tyres get to the end,” Lowndes is told #V8SC

Whincup is 2.7s behind Lowndes. “Make sure you’re saving some tyres for the end, not using them all up catching him.” #V8SC

Holdsworth is stalking W.Davison for third. The Pepsi Max Ford is tight on fuel #V8SC

Whincup has been saving “a lot of fuel” behind Lowndes in the last couple of laps. Still 15 to go #V8SC

Winterbottom takes seventh from McLaughlin with 13 to go #V8SC

Lowndes slides wide at the final corner on Lap 150, allowing Whincup to take the lead #V8SC

“Look after that fuel a bit now mate to make sure we get to the end,” Lowndes is told #V8SC

Holdsworth remains less than a second adrift of W.Davison, whose car continues to lose oil #V8SC

“He may be short of fuel so keep the pressure on mate,” Holdsworth is told of W.Davison. Four laps to go #V8SC

Whincup takes the flag to win the Sandown 500. “Way to go fellas, all yours guys, all yours,” he says #V8SC

“Well done Jamie, your engineer owes you a big one, you got him out of the shit,” says Roland Dane #V8SC

“The problem is I’m a lot of points behind Dutto because he normally gets me out of it!” replies Whincup #V8SC