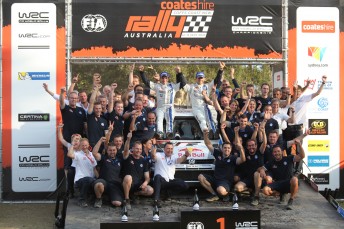 Sebastien Ogier produced one of his finest performances to completely dominate the Coates Hire Rally Australia at Coffs Harbour.

But in a classic case of how the best laid plans come unstuck, Ogier has fallen one solitary point short of securing the World Rally Championship with three events remaining.

Surrounded by towering gum trees symbolic of the Australian bush, Ogier and co-driver Julien Ingrassia destroyed their rivals to win the event.

As the vagaries of rallying bubbled to the surface Mikko Hirvonen (Citroen) suffered a puncture on the final power stage which enabled Thierry Neuville (Ford Fiesta RS) to inherit second position.

That drama-filled positional change means the WRC will almost now be certainly decided in France next month.

Neuville completed a tidy rally, finishing 1:32.1s behind Ogier with Hirvonen slipping to third overall at the finish of the 22 stages.

Ogier accumulated 19 special stage wins with Volkswagen also extending its lead over Citroen in the battle for manufacturer’s honours.

VW moved now moved to 299 points over Citroen’s 251 as they close on becoming the new benchmark in world rallying.

“I was very happy to win this rally but we have fallen just short of confirming the title but it was out of my hands,” Ogier told Speedcafe.com

“It was a great weekend for Volkswagen and we have scored some valuable manufacturer points. I know the WRC title is so close and it’s mine but we now have to wait until France,” the Frenchman said.

Ogier has now accumulated six wins this season which equals his countryman Sebastien Loeb’s effort of 2004 which started his astonishing run of nine straight WRC titles.

Hirvonen’s puncture which has delayed Ogier’s championship celebrations, came unexpectedly as the Finn outlined that he had a clean run through the final stage.

“I really don’t know how it happened because I was in the middle of the road through the whole stage,” Hirvonen explained.

As much as the rally was a dream for Ogier, it became a dire rally for Irishman Kris Meeke who restarted after rolling on day two before he completely destroyed the Citroen’s rear suspension in the final stage and unable to make it back to service.

Abdulaziz Al-Kuwari finished 10th overall and has recalimed the lead in the WRC2 standings in the Seashore-backed Ford.

See below for results