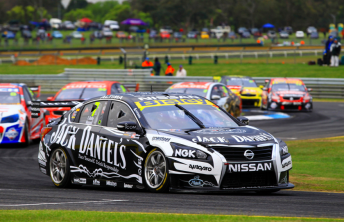 Repeating its surprise top 10 qualifying result on Sunday would be a strong showing for Nissan Motorsport as it battles the dual evils of poor straightline speed and high fuel consumption at Sandown.

Like the Erebus Mercedes entries, the four Nissans were destined to struggle in the 500 from the moment that the 70 percent ethanol blend fuel proposal was quashed by V8 Supercars.

The seven four-valve cars in the field are expected to spend a total of around 12 seconds longer in the pits than their rival Holden and Ford counterparts while taking on extra fuel throughout the four compulsory stops.

By contrast to the rapid German machines, however, Sandown’s long straights have underlined the lack of straightline performance of the Altima package.

The Nissans have been around 10km/h down on the pace-setters through the speed traps all weekend, leaving the L33s particularly vulnerable for the race.

Kelly had earlier scored 15th in the 20 minute qualifying session; with the former Bathurst winner putting almost all of the 0.54s margin to Jamie Whincup’s benchmark time down to the straightline deficiency.

“The race is going to be a really tough one for us because if we can’t get a good gap to the car behind through Turns 1 to 4 then we’ll lose a position a lap from where we are starting,” Kelly told Speedcafe.com.

“We won’t really know until we get into the race but it’s a fairly big disadvantage pit window wise that we’re facing as well.

“If we can finish anywhere near where we’re starting it’ll be one hell of a top day for us.

“It’s tough to look at it like that, because if we didn’t have those two long massive straights we’d be right there, but that’s just what we’ve got to deal with at the moment.”

Whether or not the low straightline speed is entirely due to a lack of engine performance is currently unclear, with some pointing to the Altima’s ‘bulky’ aerodynamic package as a potential drag disadvantage.

Although the aero kit was said to have been deliberately tailored to increase the naturally slippery Altima shape’s drag co-efficient, Kelly admits it’s unclear whether or not the design went too far.

“The gap that we’re missing looks like it’s more than a horsepower one, but until we really get on top of the engine it’s hard to really make comment on whether it’s a car thing or not,” he said.

“We need to get the engine a little bit better first. We’ve got a little bit of stuff on the way that’ll hopefully improve them and we’ll work it out from there.

“If we do find that we get the engine on song later in the year and are still massively struggling up the straights, we’ll certainly be pushing to have it (the aero package) looked at,” he added.

“You can’t go into a season next year without at least reconfirming whether it’s a drama or not.

“We’ve already got a bit of a plan of what we would have loved to have done with the car had we had more time to do it, aero wise.”

Although frustrated by the politics involved in V8 Supercars’ decision against using the E70 fuel for the endurance races, Kelly maintains that his team remains in high spirits.

The encouragement from analysing the corner sector times, he says, is enough to outweigh the alarming figures on the speed traps.

“We’re really lucky in that the drivers probably get upset about what’s going on more than the crew does,” he said.

“Seeing that we’re at the pointy end in places on the sector times gives the guys a fair bit of reward for all the work they’ve done.

“They know that when we get there on the engine side of things we’ll be extremely competitive.”