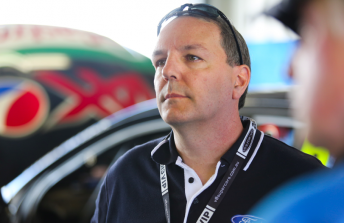 In the latest positive sign for Ford Australia’s continued involvement in V8 Supercars, the company’s president Bob Graziano is at Sandown today as a guest of factory outfit Ford Performance Racing.

The future of Ford in the touring car class has been a subject of great speculation throughout the year to date, with the manufacturer yet to officially commit backing to FPR in 2014.

The team has downplayed reports this week that it is on the verge of inking a new one-year deal with Ford, although both parties are making positive noises about moving forward together.

“We’re still in discussions with the team and once we’re collectively ready to make an announcement we’ll do that together,” Graziano told Speedcafe.com before heading to the grid at Sandown.

Graziano’s Sandown visit is a rare appearance from the Ford chief at a V8 Supercars meeting.

“I typically try and get to a certain number of races every year and Sandown is fairly close to my house,” he explained.

“This is one that I try to get to every year along with Clipsal and Bathurst as well.

“It’s a great day to be out here, the weather’s great, we’re starting from a good spot and I think it’s going to be a terrific day.”

Alongside team principal Tim Edwards, FPR co-owner Rod Nash has been the forefront of the Ford negotiations.

Nash expressed his pleasure at hosting Graziano at the circuit, but stressed that there is more to work through before a new deal is done.

“There are a number of things that we’re still talking about and obviously we don’t want to publicly discuss it too much because we’re not at a stage where any of the options are confirmed,” he said.

“But the good thing is that there are a number of options available and both parties are working through what will suit best going forward.

“As far as a confirmation goes of anything we’re still working through those options.”

Nash is confident that, despite the impending end of local production and the cancellation of the Falcon nameplate, Ford still values its racing program.

“We’ve said all along that the relationship we’ve had for a 10 year period is a very recognised thing by Ford,” he said.

“They recognise that the Geelong Football Club and the race team are two very important relationships that they’ve had for a number of years and they still very much value those relationships.

“It’s like any sponsorship, there’s always as renewal (required) at some point,” he added.

“It’s fair to say that the renewal is at a challenging time; 2013 for Ford has been a big year with their challenges of making decisions on manufacturing to be a profitable business.”

Will Davison will start the FPR Falcon that he shares with Steve Owen in the Sandown 500 from pole position.