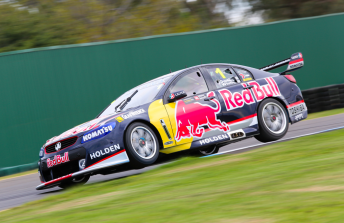 Jamie Whincup spent the entire session in the #1 Holden

Red Bull Racing Australia duo Jamie Whincup and Craig Lowndes showed the way in the final practice session before qualifying at the Sandown 500.

While co-drivers all completed at least one lap in the remaining 27 cars, Whincup had the #1 Holden to himself throughout the 40 minutes as he continued to chase set-up with his new chassis.

The points leader sat at the top of the order for much of the session, becoming the first to lap in the 1:08s bracket with 12 minutes remaining.

Lowndes and the Holden Racing Team’s Garth Tander subsequently took turns at the top during the closing stages, before a last effort completed after the chequered flag put Whincup ahead by just 0.003s.

Will Davison, Lee Holdsworth and Mark Winterbottom completed the top seven; all of whom went faster than Lowndes’ new practice record from Friday.

Practice 4 was interrupted by a single red flag period, called after just eight minutes to retrieve the #17 Dick Johnson Racing Falcon that Ashley Walsh had buried in the Turn 9 gravel.

The V8 Supercars will return to the circuit for a 20 minute qualifying session at 1225 local time.