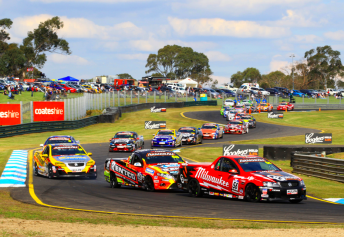 Pretty leads Walton prior to the clash

Tempers flared in the V8 Ute Racing Series after rivals Nathan Pretty and Kris Walton clashed while contesting the lead in the closing stages of Race 1 at Sandown.

The Ford-mounted Walton had spent the first nine of the 12 laps behind pole-sitter Pretty, before an attempted pass saw both Utes spear off the circuit.

The incident allowed Walton’s Rentco team-mate Ryan Hansford to sneak through for the third win of his career.

Walton finished third behind Pretty and was later showing no remorse for his aggression.

“I knew when he’d come in he’d start sooking as he usually does but we had to make it interesting and that’s what we did.”

Despite gaining ground on series leaders Ryal Harris and David Sieders, Pretty was incensed post-race, calling for Walton to be removed from the category.

“I don’t mind finishing second at all but when I get run off the road then it’s just a joke,” he said.

“I got crashed into not once, but three times by the same bloke and then he has the audacity to call me a whinger?

“I whinge because I take pride in taking care of my car for my sponsors and that’s how I retain my sponsors whereas him, he’s had the same problem all the time with the stewards for running people off the road and hitting them to pass.

“It’s not hit to pass its pass cleanly in this sport. We’re tyring to clean it up (the category’s driving standards) and the only way to clean it up is to get rid of that idiot.”

Stephen White, who was a late replacement for John Bowe in the Touring Car Masters, took his Erebus Motorsport Holden to fourth, while Harris limited the points damage by winning a spirited dice for fifth.

The V8 Utes will return to the Sandown circuit for two further races on Sunday.