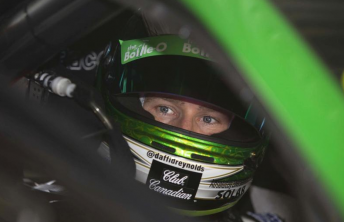 David Reynolds will continue to drive Rod Nash Racing’s The Bottle-O entry in the V8 Supercars Championship for a further two years.

The new agreement was announced by the team, whose car is run as Ford Performance Racing’s third entry, this afternoon.

FPR’s driving line-up has been the subject of much speculation in recent months with Reynolds, Will Davison and team protege Chaz Mostert having all been without confirmed seats for 2014.

Although Davison’s future remains in limbo while FPR finalises a new deal with Ford, team co-owner Rod Nash says that Reynolds’ position was never in doubt.

“While Dave is part of the FPR family, he technically drives for my licence under the Rod Nash Racing banner,” he said.

“The commercial budget for my licence is separate to that of the #5 and #6 factory cars entered under the FPR banner.

“The Bottle-O has built their marketing and communications around the team and they use Dave as the face of their campaigns so they also wanted him to stay.

“Dave’s deal also has nothing to do with the ongoing discussions FPR and Ford are engaged in. While Ford is a partner of RNR we are merely one of their customer teams, not the official factory team.”

The former Formula Ford and Carrera Cup champion scored a sensational second place finish alongside Dean Canto at Bathurst last year, but is yet to break through for his maiden victory.

“I really like driving for Rod and RNR and being part of the big FPR family is where I want to be,” said Reynolds of re-signing with the team.

“We’ve had some success but we both want to build on that and take everything to the next level so there was never any intention to do anything but keep driving for Rod.”