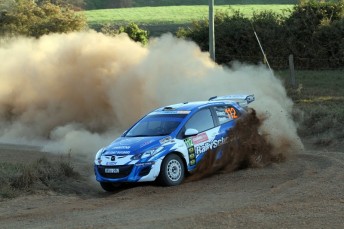 After 132km of competition, the battle for the day’s honours was won by Reeves and his co-driver Rhianon Smyth after a brilliant day of driving south west of Coffs Harbour.

Reeves started the second day of full competition in second place and began solidly recording the fastest time on the morning’s opening test, the 49.9km Nambucca stage.
His time was one tenth of a second faster than Evans, but on the repeat of the stage this afternoon, Reeves increased his pace and finished 5.4s clear of the current rally leader.

Both runs of the day’s shortest stage Valla (14.83km) were won by Evans but going into tonight’s two Super Special Stages, just 1.1s separated the pair.

The 1.6km purpose-built super special in the centre of Coffs Harbour produced the best from Reeves. He recorded the fastest time on the first run and backed it up with equal fastest on the second run, pipping Evans for the heat win by 1.5s.

“Tyre wear was a big concern today as we covered a lot of distance but we were able to manage ours well and this helped our cause today.

“I can’t wait to get back out there again tomorrow and resume the battle with Eli.”