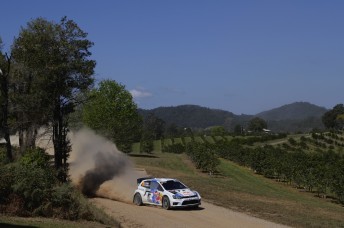 The Finn Hirvonen has driven brilliantly but can find no answer to respond to the raw pace shown by Ogier in the Polo R WRC.

Neuville had been engaged in a tense battle for third with Citroen guest driver Kris Meeke, however the Irishman speared off and rolled 20km into the second run through the monster 49.9km Nambucca SS13.

Both Meeke and his co-driver Chris Patterson escaped injury but their rally was done which will prove costly to Citroen’s desperate hopes of keeping in touch with VW in the manufacturer fight.

Ogier has remained stoic all weekend however there were signs of some relief creeping into his demeanour as it marches smoothly toward the biggest moment of his motor racing career.

“I’m very happy. We have extended the lead and it looked pretty good out there,” the Frenchman said.

“It’s a long day tomorrow. The car was perfect. Of course I have that in mind but I still must be careful,” Ogier said.

Ogier’s team-mate Andreas Mikkelsen has moved up to fifth ahead of Mads Ostberg’s Ford Fiesta RS.

The demise of Meeke has promoted local driver Nathan Quinn in the Motorsport Italia Mini to eight, one position behind Evgeny Novikov.