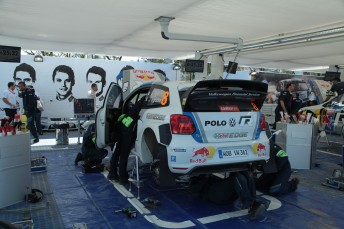 The Volkswagen Polo R ace was able to extend his overnight lead by 7.6s to a 27.6s buffer over Citroen chaser Mikko Hirvonen.

Thierry Neuville (Ford Fiesta RS) is holding down third place ahead of Kris Meeke who is under instruction to finish the rally as Citroen try to catch VW in the manufacturer standings.

On the 14.84km Valla stage Jari-Matti Latvala suffered a puncture to his right rear early in the run. JML has surrendered a position to Mads Ostberg who now moves to fifth overall.

“At the start of stage  I went wide and hit the bank so we drove most of the stage with it (puncture),” Latvala said.

VW has now won all of the stages in Round 10 of the World Rally Championship going into the midday service.

Ogier seems to be responding to any challenge Hirvonen is throwing down at will.

“At the moment everything is going perfect for us. I cannot say that I really pushed. I just tried to drive clean and fast and I’m having fun,” Ogier said.

Hirvonen is pushing but remains frustrated at not being able to stop Ogier from extending his lead.

“It’s difficult to make big gaps against him,” Hirvonen said.