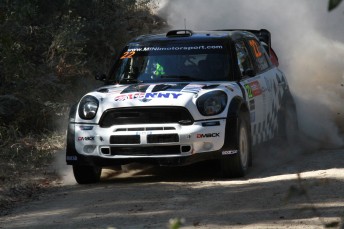 Quinn has surpassed his own expectations and that of critics after improving one position to be classified ninth overall going into day two of the Coates Hire Rally Australia at Coffs Harbour.

Driving the Motorsport Italia-prepared John Cooper Works Mini, Quinn and co-driver Glenn Macneall will start second on the road today after slipping past the Citroen of Khalid Al Qassimi.

“I can guarantee that I’m having more fun than the guys fighting for the championship,” a beaming Quinn said.

“There is more in me than adapting the car to me.”

“He came into the rally with 50km of experience. To be second on the road will be great,” Macneall said.

The Saturday schedule includes repeat runs of the 14.84km Valla and monster 49.90km Nambucca stages which are more open in contrast to the opening day.

Ominously rally leader Sebastien Ogier feels he will be more suited to the quicker sections in the works VW Polo.

The Frenchman, a winner of five of the nine WRC rounds this season, is shortening his odds of sealing the title tomorrow with three rounds in the championship remaining.

“It’s going to be faster, wider and I think I like more the profile of tomorrom (Saturday) more,” Ogier told Speedcafe.com

“I think we can say the opening day was perfect. It was a really good start to the rally.”

Citroen guest driver Kris Meeke and co-driver Chris Patterson had held onto second place on the first morning before being overtaken by Mikko Hirvonen another DS3 WRC.

The Irishman keep out of trouble, saying he was intent on remaining cautious with rocks and poor visibility late on the first day.