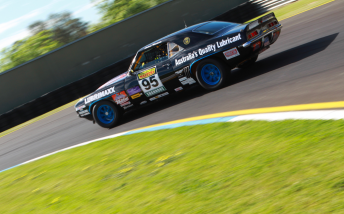 Andrew Miedecke proved too strong in the opening race

Andrew Miedecke took a dominant victory in the opening race for Round 6 of the Touring Car Masters at Sandown.

The event took a major twist on Saturday morning when it was confirmed that series leader John Bowe had been excluded from the meeting following an incident with an official on Friday.

Chevrolet Camaro driver Miedecke, who had shared the Friday practice sessions with Bowe at one apiece, went on to make the most of his rival’s absence.

Starting on the front-row alongside pole man Keith Kassulke, Miedecke headed the field to the first corner, leading all 12 laps on the way to a 12 second win over Jim Richards.

Paul Freestone made it two Camaros in the top three with third, while the Mustangs of Tony Karanfilowski and Bowe’s substitute Stephen White completed the top five.

Kassulke had run second to Miedecke until spinning to the back of the field mid-race. He eventually finished 13th.

Miedecke, however, had no such problems and ended the race optimistic of more success on Sunday.

“I think we have been held back a little to date,” he said.

“We have had a few things this year that haven’t gone our way and we have been a little bit down in power in some of the races, so now we have a good engine and are pretty confident we can keep on going with it.”

The Formula 5000 Australia Cup is also adding to the historic flavour at the V8 Supercars’ Sandown 500 event.

Tom Tweedie secured pole for Sunday’s F5000 feature race in his Chevron by taking comfortable victories in both heat races.

The youngster lowered the outright Sandown lap record twice during the day, eventually leaving it at 1:05.76s.

Tweedie’s dominance left the battle for second as the main entertainment, with Kiwi Andrew Higgins eventually winning out on both occasions.

Richard Davison and Ken Smith will share the second row on Sunday after proving spirited rivals to Higgins.