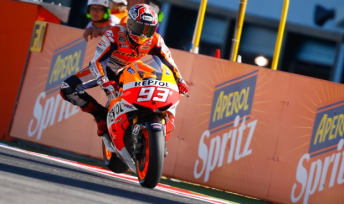 The Honda rider suffered a high speed accident just hours earlier but this failed to shake his confidence. Forced to ride his spare bike due to the damage incurred to his number one machine, the Spaniard lit up the timing screens as he surged to pole with record breaking pace.

Yamaha’s Jorge Lorenzo and Valentino Rossi completed the front row but they were more than half a second adrift of the high flying Marquez.

It was Lorenzo who set the early pace in qualifying and this gave his team hope the new seamless shift Yamaha could secure pole on its maiden appearance.

However, once Marquez got up to speed there was nobody who could keep pace with the championship leader. Lorenzo held second spot only to be displaced by Rossi as the session reached the final minutes.

Lorenzo fought back and reclaimed second spot shortly after while Honda’s Dani Pedrosa, who had been struggling, shot up into fourth, where he finished as the chequered flag dropped.

Time was ticking but there was still plenty in store for the San Marino crowd as Marquez produced an astonishing 1:32.915s effort to go even quicker and obliterate Stoner’s lap record.

Lorenzo and Rossi held on two second and third positions ahead of Pedrosa. Cal Crutchlow, who was forced to come through qualifying 1, managed to post a time good enough for fifth just ahead of Aleix Espargaro.

Stefan Bradl was seventh with Alvaro Bautista, Andrea Dovizioso and Nicky Hayden rounded out the top 10. Australia’s Bryan Staring will start from 23rd on the grid.