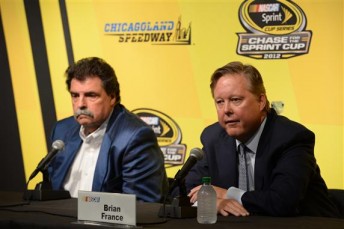 Mike Helton and Brian France address the media in Chicago

The fallout from the controversial final race before the NASCAR Sprint Cup’s ‘Chase’ at Richmond last weekend has continued with four-time champion Jeff Gordon added as the 13th contender.

After NASCAR dumped Martin Truex Jr out of the Chase after his Michael Waltrip Racing team instructed team-mate Clint Bowyer to spin and bring out a late race caution, the ruling body has now placed the no.22 from Penske (Joey Logano) and fellow Ford team Front Row Motorsports on probation through to the end of the year for a similar action.

Gordon didn’t make the Chase field after falling just short of a top-10 points position and because he had no wins through the season’s first 26 races, he also was not in position to earn one of the two Wild Card berths. 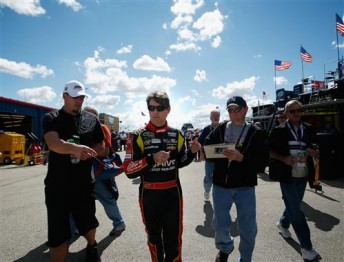 Gordon now has a chance to win his fifth title

NASCAR bosses saying the fairest thing to do was to include the Hendrick Motorsports driver into the Chase field.

“More than anything, it’s the right thing to do,” said NASCAR CEO Brian France.

“It wasn’t one set of circumstances that led us to this decision.

“It’s a multiple set of circumstances that any one of them could have altered and given (Gordon) a disadvantage.

“But cumulatively they were just overwhelmingly, in our view, in such a way that that just wasn’t fair. We needed to try to see if there was a way that ‑‑ we can’t go back and run the event again, but we also are trying to be as fair and equitable as we can with all the teams. And this is an example of that.”

Team owner Rick Hendrick was pleased to have Gordon join his teammates Jimmie Johnson, Dale Earnhardt Jr. and Kasey Kahne in the Chase.

“What occurred at Richmond was not of their making, and they’ve had to wrestle with some very difficult decisions throughout the week,” Hendrick said in a statement.

“I know everything done by NASCAR has been a sincere effort to be fair and ultimately do what’s best for our sport and our fans.”

All four Hendrick teams, which include drivers Gordon, five-time champion, will now compete in the Chase.

Gordon posted on Twitter “Wow we just gained 1250 points! Very appreciative of @NASCAR consideration on this matter as well as fans overwhelming support.”

Keen to keep the notion of fair play in the sport, NASCAR officials will meet with all drivers, crew chiefs and team owners at Chicagoland this weekend to as NASCAR President Mike Helton has put it to “address and make more clear the path going forward as it applies to the rules of racing and the ethical part of it.”