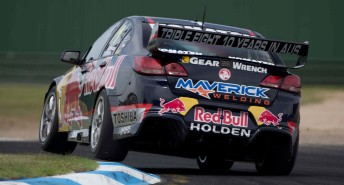 Paul Dumbrell will start the first of two Saturday sprint races at Sandown from pole position after Jamie Whincup proved too strong for his opposition in qualifying.

Fresh from topping the final practice session earlier in the morning, Whincup and his Red Bull Racing Australia outfit put in a typically methodical qualifying performance.

Jumping into the 1:08s on just his second flying lap, Whincup spent an extended spell in pitlane before returning for the frantic final minutes.

Having been bumped from the head of the time sheets by Will Davison with seven minutes remaining, Whincup returned to the top with just over 60 seconds left on the clock.

Whincup’s time of 1:08.62s proved 0.05s faster than the lap record he had reset in Practice 4, and came despite having to take a shallow line out of the final corner to avoid the slow Team BOC Holden of Jason Bright.

A late time from Chaz Mostert proved just 0.09s shy in second, putting the Dick Johnson Racing Ford on the front-row in the hands of Dale Wood later this afternoon.

Davison had failed to improve on his final set of tyres, and was left frustrated by slow traffic on his very final attempt.

By contrast, eighth was the result of a late rescue effort for Courtney, who sat outside the top 15 with just three minutes remaining.

Man-of-the-match in qualifying was arguably Todd Kelly, who proved just 0.5s adrift of Whincup on his way to 15th in a Nissan Altima that is significantly down on straightline speed.