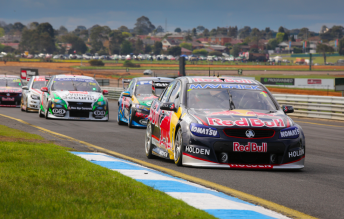 Dumbrell leads Owen and Wood away at the Safety Car restart

Paul Dumbrell eased away from the field to take a comfortable victory in the co-driver’s qualifying race at Sandown.

The Red Bull Holden, which had started from pole thanks to the earlier efforts of Jamie Whincup, lost the lead to fellow front-row starter Dale Wood off the grid.

Dumbrell regained the ascendancy with an inside move at Turn 10 on just the second lap before controlling the race to the flag.

Owen had cut his way from sixth on the grid to third in the opening metres, but appeared content in second once he had too cleared Wood’s Dick Johnson Ford. While positions were largely stagnant at the front, the lack of points on offer for the Sandown sprint races this year didn’t stop a variety of incidents occurring down the order.

The action began on the second corner of the very first lap, where Paul Morris clanged into Lucas Dumbrell Motorsport team-mate Matthew Halliday, turning the latter around.

A later incident between Ashley Walsh and John McIntyre at the same corner damaged the bonnet pins on the former’s Dick Johnson Racing Falcon, leading to a spectacular failure on the main straight at the Lap 14 Safety Car restart.

The full course yellow had been called after Jeroen Bleekemolen stopped the #97 Tekno Holden on the circuit with a suspected broken gearbox.

Another in trouble was Ryan Briscoe, who was turned around by Chris Pither after squeezing the Wilson Holden into Turn 10 moments prior to the Safety Car. The Supercheap Holden was eventually the last of the finishers in 23rd.

Craig Baird ran 11th going into the final corner but failed to see the chequered flag after a bumping duel with Andrew Jones led to a flat right-rear tyre and a spin for the IRWIN Mercedes.

Completing the retirements was Jonny Reid, who suffered a sticking throttle in the Tony D’Alberto Holden.

A second qualifying race, this time for the primary drivers, will set the grid for Sunday’s Sandown 500.

See below for the full Qualifying Race 1 result