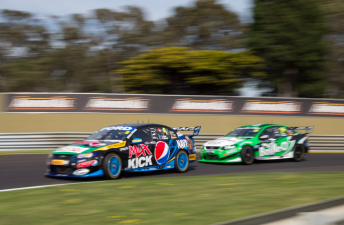 Drivers are expecting that an aerodynamic draft from a rival car could prove the deciding factor in Saturday morning’s qualifying session at the Sandown 500.

A headwind up the back straight emphasised the importance of minimising aerodynamic drag in practice on Friday.

A good tow around Sandown is said to be worth upwards of 5km/h down the longest straight and 0.2s across the whole lap.

A margin of 0.2s separated the top six cars in Friday’s final session, with the same gap good enough for a 10 place gain deeper in the field.

“It’s going to be a bit like Formula Ford I reckon, there will be people searching for a tow because it’s worth a lot of lap time here,” noted Ford Performance Racing’s Will Davison of the 20 minute qualifying session, which will set the grid for the first of two 60 km qualifying races.

“I was out there on my own down the back straight (in practice). It’s definitely going to make a difference if someone can nail that tow and get a good lap.”

While the assistance of a tow could help lower that benchmark further in today’s 20 minute qualifying session, the frantic nature of the sessions ensures that it will be difficult for teams to use their cars together strategically.

“It will be important, especially if there’s a big headwind down the back straight, but you can’t concentrate on it too hard,” cautions Jason Bright of drafting in qualifying.

“If you don’t get enough tyre temperature to start the lap, catch them before the end of the lap or even just impede yourself a little bit into the last two braking areas, you can quickly lose what you’ve gained out of it.

“I reckon the Nissans will be pretty good to get a tow from because they’re like a brick at the front; they punch a big hole in the air,” he added after a practice day that had seen the Altimas some 10km/h slower than their rivals at the speed trap.

“It’d be good to do it  with a team car but it’s so hard to repay the favour when all the best times come at the end of qualifying.

“It’ll be every man for himself, and those who get it right should get a good chunk (of time) out of it.”

V8 Supercars Driving Standards Observer Cameron McConville warned co-drivers against overly aggressive chasing of ‘side drafts’ in the races this weekend after a series of wild exchanges were witnessed at Sandown last year, particularly in the cut-and-thrust qualifying races.

Unlike previous seasons, this year’s 60km qualifying sprints will award no points, existing solely to set the grid for Sunday’s 500km endurance race.