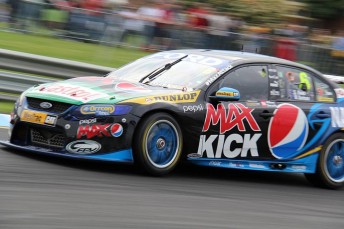 Will Davison drove to a commanding victory in the second qualifying race to secure pole position for the Sandown 500.

Starting second thanks to the efforts of co-driver Steve Owen in the opening 60km heat, Davison beat pole man Jamie Whincup to the first corner before driving away to chalk up a near six second win.

Davison, who suffered a disastrous run at Sandown last year, also re-set the lap record in the closing stages.

Whincup led home team-mate Craig Lowndes in second and third respectively after a largely pedestrian race at the front.

Mark Winterbottom provided most of the entertainment, working away at the back of Chaz Mostert before eventually passing the Dick Johnson Racing entry for fourth with two laps remaining.

David Reynolds ensured a sweep of FPR and Triple Eight equipment in the top six.

James Courtney was thebest of the rest having driven his Holden Racing Team Commodore from 10th on the grid to seventh.

The 20 laps went significantly less well for team-mate Garth Tander, who dropped from fourth to 16th with a botched start before taking the flag in 13th.

Todd Kelly gave Nissan hope by dodging some robust mid-pack battles on his way from 15th to 10th.

Two of his Nissan team-mates, Rick Kelly and Michael Caruso, had earlier been on the inside of a four-wide squeeze at Turn 1 that saw both Maro Engel and Dean Fiore turned around.

Alex Davison was forced to the pits after taking damage in the melee, leaving the Jeld-Wen Ford to share the back row of the grid with Fiore.

See below for the Qualifying Race 2 result, which doubles as the grid for the 500