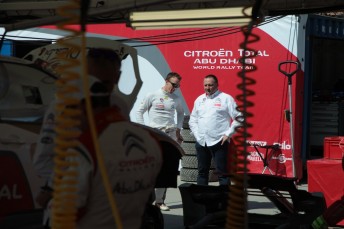 Citroen team boss Yves Matton says it will be difficult to fight against Volkswagen and remain in touch in the manufacturers title after Kris Meeke’s massive crash.

Both Meeke and co-driver Chris Patterson were uninjured in the accident when their DS3 rolled seven times 20km into the 49.9km Nambucca stage about one hour south of Coffs Harbour.

Two wheels were ripped off the car during the accident with Meeke in a battle with Ford’s Thierry Neuville for third.

Citroen team boss Yves Matton said the crash now places the Chevron-badged team in a difficult situation as they try to keep VW in close proximity in the manufacturer’s battle.

“With this situation it seems to be difficult,” Matton told wrc.com

There are 125km of competitive stages remaining on the final day of Coates Hire Rally Australia.