Bowe excluded for clash with official

Bowe excluded for clash with official 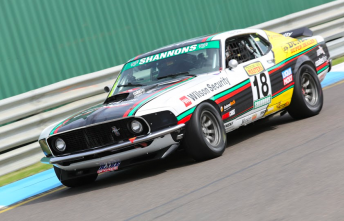 John Bowe will be a spectator for this weekend’s Touring Car Masters round at Sandown after being excluded from the meeting following an incident with an official on Friday.

Having suffered from brake issues during the second practice session, a heated Bowe failed to obey the orders of a pit official upon returning to the lane.

The conflict saw Bowe’s Ford Mustang run over the foot of the female volunteer, Lesley Butler, who subsequently fell to the ground.

Although Butler was not seriously injured, event stewards elected to exclude Bowe from taking any further part in the meeting.

A remorseful Bowe lodged a notice of appeal upon learning the extent of his penalty, but declined to proceed further once it became clear that any hearing would unlikely have been held until after the meeting.

Bowe has been replaced in the Mustang by Stephen White, whose V8 Ute Holden shares a major sponsor, Dunlop Super Dealers, with Bowe.

“I’m upset about it, I’m really quite devastated, but if you do the crime you’ve got to do the time,” Bowe told Speedcafe.com of the penalty.

“Although I feel that the penalty was a bit harsh, I do understand it. I’m very conscious of the fact that the marshals and officials all do this voluntarily.

“I was wrong and out of order and I’m not trying to make any excuses for it.

“It’s a very good lesson in mind management. We all have a point of rattled I guess. It’s a redline in your brain somewhere and it’s a good lesson in trying to manage that better.”

White subsequently set the ninth fastest time in his first hit-out aboard the Mustang in Practice 3.

The car is now running without its usual ballast and rev restrictions that Bowe must carry under the category’s driver parity regulations.