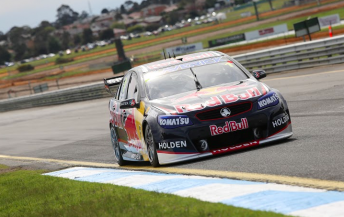 Jamie Whincup has given his new car the tick of approval despite ending Friday practice at Sandown well down the time sheets.

The points leader ended the day with the 18th fastest time, 0.7s adrift of his pace-setting team-mate Craig Lowndes.

Paul Dumbrell had earlier taken the car to 14th in the co-drivers only second session, which in turn followed a 13th for Whincup in Practice 1.

Whincup leads the standings by just 55 points heading into the Pirtek Enduro Cup after a torrid run last time out at Winton, where his campaign was dogged by a driveline vibration.

The repeat appearance of the vibration at a post-event Queensland Raceway test, where the team had moved back from its in-house tailshaft back to the Albins-supplied unit in a bid to isolate the issue, proved the catalyst for the chassis switch.

“Today was all about the new car, testing out what does and doesn’t work,” said Whincup, who rarely shows his true pace prior to qualifying.

“We’ve got four practice sessions (including one on Saturday morning) to get to grips with it and out of the box, it’s a lot better.

“It feels much better and there are no vibrations like those we suffered at Winton.

“We’re looking good. We’ve got another practice session to work on a few things tomorrow before qualifying.”

The Red Bull team, which had worked overtime to have Whincup’s new car ready for a shakedown run earlier this week, ended Friday practice fastest through the efforts of Lowndes.

Having enjoyed a somewhat smoother pre-event build-up than his team-mate, Lowndes is full of confidence heading into the rest of the weekend.

“We’re very happy; the car is responding extremely well and what we’ve learned from the test day last week in how to manage the car better over bumpy tracks like this is paying dividends,” he said.

“The car is nicer to drive now and I’m really happy. The biggest thing we have to keep an eye on really is the weather as there’s likely going to be some wet conditions.

Lowndes and co-driver Warren Luff are the defending winners of the Sandown 500.

This year’s event is a milestone one for Triple Eight, with the team celebrating 10 years since it took control of the formerly Briggs Motorsport operation.