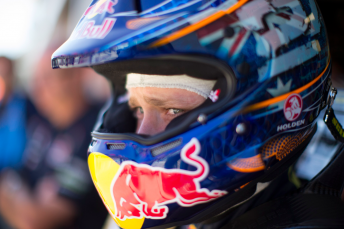 Casey Stoner will wind back his V8 Supercars commitments next year after just a single season in the Dunlop Series.

The 27-year-old has endured a torrid time on track in the second-tier V8 Supercars class, while also expressing continued displeasure at the off-track workload that has come with the Red Bull-Pirtek Holden program.

Having spoken to Speedcafe.com in July of the potential for a sabbatical next season, Stoner confirmed to media today that he will not be continuing as a full-time driver.

“I will probably do some car racing here and there in different times,” he told the Australian Associated Press and other media at a function in Brisbane on Friday.

“To be honest, after this year, I realised I want to get away from competition for a little while.”

Stoner is expected to see out his commitments with Triple Eight at the final two rounds of the 2013
Dunlop Series at Bathurst (October) and Sydney (December).

The now Gold Coast-based Stoner quit the MotoGP World Championship at the end of 2012, citing disillusionment with the sport and a desire to spend more time with his young family.

He has returned to the controls of a Repsol Honda MotoGP bike during testing in recent weeks, but has repeatedly denied any interest in returning to motorcycle racing.