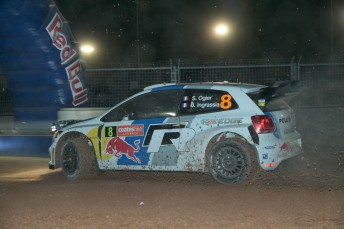 Sebastien Ogier will start the opening leg of special stages at Coates Hire Rally Australia feeling no extra pressure head of a weekend which could supply him with a maiden World Rally Championship.

The French ace is set to take over the mantle from his celebrated countryman Sebastien Loeb, winner of the last nine WRC titles, by netting the title with three rounds to spare.

At the previous event in Germany, Ogier was an early casualty when he overshoot his braking point ending in a vineyard with front-end damage and subsequently missing his first opportunity to seal the title..

Ogier, who has won five rallies this season, has a better than even chance of giving Volkswagen its first drivers crown in the WRC.

“I approach this rally like any another one. I’m looking for a good result if I can and it could be good for the championship,” Ogier said calmly declared before taking the quickest time in the second 1.6km Super Special Stage  at Brelsford Park.

“(There is) no more pressure (than Germany). This weekend with a victory we can come very close (to winning the title).

“ In Germany we made our first mistake of the season. It was not a huge one.

“I also know in motorsport it’s never over until you see the finish line. I just want to do my best.”

Ogier’s Volkswagen team-mate Andreas Mikkelsen (fastest in the opening Super Special Stage) will be guided by the pace notes of new co-driver Paul Nagle and is mindful of helping the German manufacturer stave off the challenge from Citroen in the manufacturer’s title.

“If can help Seb (Ogier) and Jari-Matti in some way in the manufacturer title that is my goal.”

Today’s schedule will kick off with the 8.44km Tuckers Nob stage